The Glenayle Nickel Project is a massive landholding covering 2700km2, located approximately 210 km northeast of Wiluna, Western Australia.  The Glenayle project was identified after a desktop assessment to identify new areas in Western Australia considered prospective for Ni mineralisation, and where a large first mover land holding could be achieved. The landholding consists of 5 contiguous exploration licences under application by Johnston Lakes Nickel Pty Ltd, a wholly owned subsidiary of LEX.

The Warakurna LIP trends roughly west-east for 1500 km from the Bangemall Basin in the west to the Musgrave Complex (Musgraves) in the east-southeast. The Musgrave is known to host vast quantities of metallic ore including the Nebo-Babel Ni-Cu-PGE deposit. Nebo-Babel is hosted by the Giles intrusions that are dated to the same ~1070 Ma Rodinia magmatic event associated with the Glenayle dolerites, which are now considered to form part of the Warakurna LIP.

The Significance of LIPs: 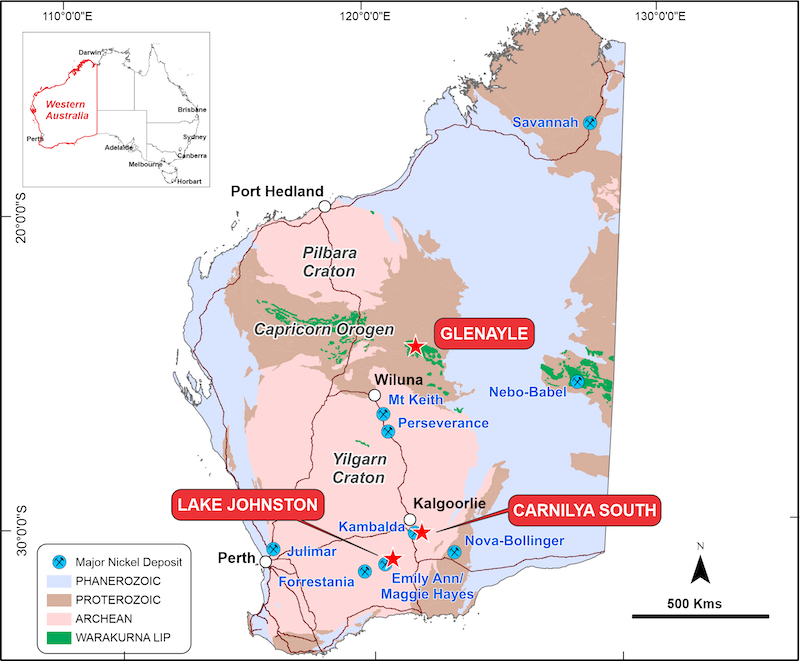 The Glenayle project is considered vastly unexplored and presents a unique opportunity for the Company. Compilation of previous drill data has highlighted very limited drilling (3 RC and 2 diamond holes) in the entire area. Vale, who held the ground in 2014-2019, similarly selected the area for magmatic nickel sulphide mineralisation specifically related to mafic intrusives. However, no follow-up work was completed over the land package, which was subsequently relinquished by Vale during their exit from Australian coal and other non-core assets.

Geophysics, and particularly the acquisition and interpretation of gravity survey data are key to exploration targeting within the project. Developing a detailed aeromagnetic and gravity dataset will be the primary exploration tool used to interpret the distribution and concentration of the mafic rocks hosting mineralisation, such as feeder sills, layered intrusions, and dykes within the Salvation Basin.

The Company is considering an airborne gravity gradiometry survey as a first pass technique to screen the large tenement package for gravity anomalies that may represent larger bodies of mafic intrusions. This would then be followed up by detailed ground-based gravity and electromagnetic surveys over the anomalies identified to define targets for stratigraphic diamond drilling.

Land access negotiations by the Company with the determined Native Title group have commenced. The tenements are expected to be granted in Q4 FY 2022. Glenayle is an exciting, new, and large addition to the Company’s exploration project portfolio.